[ngg_images source=”galleries” container_ids=”5″ display_type=”photocrati-nextgen_basic_slideshow” gallery_width=”600″ gallery_height=”200″ cycle_effect=”fade” cycle_interval=”2″ show_thumbnail_link=”0″ thumbnail_link_text=”[Show thumbnails]” order_by=”sortorder” order_direction=”ASC” returns=”included” maximum_entity_count=”500″]
Developmental plasticity is a key adaptive process allowing organisms to cope with changes in their environment by modulating the phenotypes produced by a given genotype. This is particularly obvious in plants that constantly adapt their form. In parallel to this plasticity, there is a great regularity in the shape of the organs that plants continuously produce. The main question driving our research is how is the plant coping with both plasticity and robustness?
In the lab we want to understand the molecular and cellular basis of developmental plasticity/robustness. For this we use the model plant Arabidopsis thaliana and study the development of its root system. The root system is mainly determined by the post embryonic growth of primary root and formation of lateral roots that allow roots to forage and anchor plants.
Research in the lab follows to main axis:

The de novo formation of lateral roots (LRs) is an exquisite system to study the dynamics of 3D plant organ morphogenesis. LRs derive from a limited number of homogeneous founder cells that proliferate to form a primordium with stereotyped shape and tissue organisation. LR tissue organisation is similar to the one of the primary root which was specified during embryogenesis. In particular, a meristem is formed de novo which sustains the autonomous growth of the LR. Although the ontogeny of LRs has been described, how de novo pattern formation and outgrowth of LR is set up in an orthogonal axis to the original embryonic root axis remains an important question.

The lab uses  light sheet fluorescence microscopy (LSFM) for live imaging of plant development in close-to-natural growth conditions and at the organ, cellular and sub-cellular scales. LSFM selectively illuminates a small portion of the specimen while collecting only the light emitted at the current focal resulting in lower phototoxicity and bleaching. LSFM has become increasingly popular in developmental studies as it provides detailed time-resolved information on the behaviour of all cells over the entire duration of the morphogenetic process. 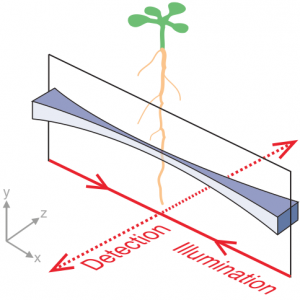 We study how TAS3 derived trans acting siRNAs (ta-siRNAs), a specific class of highly conserved small regulatory RNAs, can act in a non-cell autonomous manner to control root growth.  TAS3 derived ta-siRNAs are produced by the initial ARGONAUTE7 (AGO7)/microRNA (miR390)-mediated cleavage of TAS3 RNAs which subsequently are processed by RDR6 to generate siRNAs. The ta-siRNA pathway is evolutionary ancient and has been implicated in several aspects of plant development including leaf patterning and root growth. The ta-siRNA pathway allows amplification of the effect of the miRNA and also of the propagation of its effects several cells away, as siRNA have been shown to be mobile. 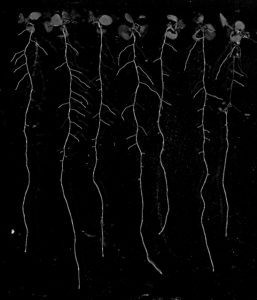 What determines how, upon miRNA cleavage, only TAS precursors but not any other miRNA-cleaved mRNA, enter the siRNA pathway is unknown. We showed that hormonal inputs are integrated onto ta-siRNAs production fine tuning lateral root growth. We also focus on the subcellular organization of the RNA silencing machinery and showed that ta-siRNAs biogenesis occurs in dedicated cytoplasmic foci and in association with the endomembrane system. These identified foci flank P-bodies that are well known hotspots for RNA decay and turnover, and thus define a cellular nexus for the genetic evidences of a functional interplay between RNA silencing and RNA decay. We now focus on the relationships between small RNA mediated mRNA degradation and mRNA quality control processes in plant cells as well as the molecular specificity of AGO7 action in routing its substrate away from RNA degradation and to enter the siRNA pathway. 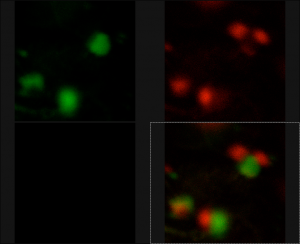 The laboratory is part of the Center for Organismal Studies of the University of Heidelberg.

The lab is also a member of the Cluster of Excellence CellNetworks and has been created by endowments of the Schaller foundation and  the Baden-Württemberg state. It is supported by grants from the Boehringer Ingelheim Foundation and the DFG. The lab is also part of the DFG Research Unit FOR2581 Quantitative Plant Morphodynamics.